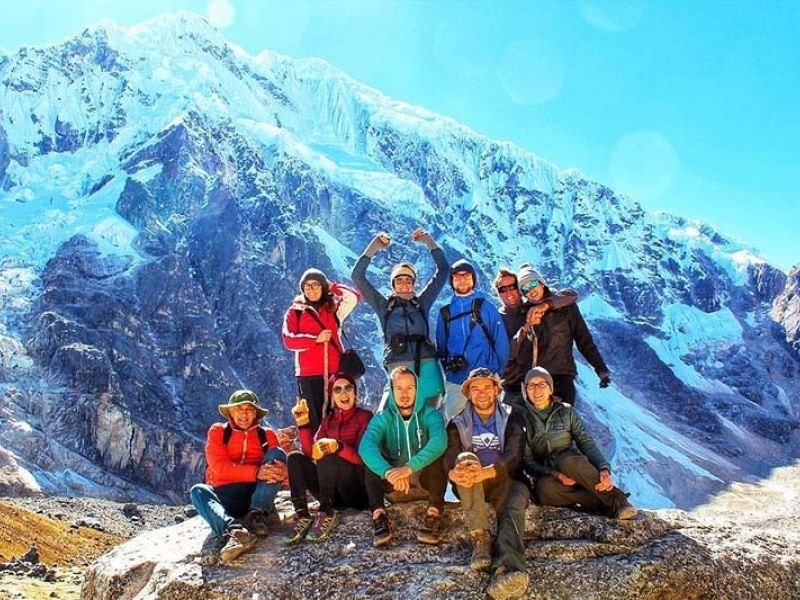 Peru is known for its enormous territorial extension. Its geographical location, with the territory of the Amazon and the Cordillera Blanca, makes it a suitable country for lovers of adventure tourism.

Because of the above, Peru is an excellent option for ecotourism, from getting to know its mountains on expeditions to familiarizing yourself with its culture in indigenous settlements.

If you are curious about some of Peru’s most visited and inhospitable mountains, we invite you to continue reading our article.

Adventure tourism lovers are, by definition, those who visit places that are in contact with nature, such as parks, mountains, rivers or waterfalls.

The activities that can be carried out in this type of expeditions in Peru are: mountaineering, trekking, camping or rafting (always with different levels of difficulty).

The diversity of climates and reliefs allows that many of these activities can be realized, being a perfect opportunity for the lovers of the tourism of adventure.

Mountains Every Ecotourism and Mountaineering Lover Should Visit in Peru

There are many places to practice ecotourism in Peru, but the mountains are those that stand out for the possibility of connecting with nature, finding oneself and doing physical exercises.

Climbing these great mountains will allow you to observe a view you would never imagine, so wasting an opportunity like this is a big mistake.

Want to climb a mountain?

It is known as the Mountain of the Seven Colors for the different tonalities that are observed in its beautiful and wonderful landscape.

It is 5200 meters above sea level and is two hours away from Cusco, plus a five kilometer walk. It is located in the district of Pitumarca, on the Cordillera de Vilcanota.

The popularity of the mountain is remarkable thanks to the colors it has. This is due to the composition of minerals that conform it: red clay, mud and sand of different types. This landscape is visible for more than 1000 daily tourists who climb it.

This mountain is located in the district of Ocongate, province of Quispicanchi, also very close to Cusco.

It has a height of 6372 meters above sea level and is considered an “Apu” (a deity) for the surrounding villages. Here we leave you a video about how trekking is done in this wonder of nature.

An “Apu” is the name in Quechua for a gentleman or deity and most of it is located in the Sacred Valley, a few kilometers from Cusco, for that reason several excursions are made every day.

Ausangate is part of the Vilcanota mountain range and in 1953 obtained the first record that it has been climbed, specifically by a German expedition.

In this mountain you will find several unique animals, as well as see the flight of the condor, the magnificent bird of the Andes.

Located in Arequipa, one of the most beautiful regions of Peru, this volcano is a unique destination for lovers of mountaineering and adventure, as it takes a little preparation to reach its summit.

The view from a snowy volcano is something that is given in few places of the world, for that reason, the effort, dedication and persistence that you do to climb it will have its reward.

An interesting fact is that, at certain times of the year, it is possible to see the Peruvian coastline from its summit.

The Cordillera Blanca is a mountain range whose peaks exceed 6000 meters above sea level and is located in the department of Ancash.

It extends for 180 kilometers, earning the nickname “White” for the altitude of its peaks, which makes them snowed much of the year.

Together with the Cordillera Negra they form the so-called “Callejón de Huaylas”, in which the Santa River circulates.

The Cordillera Blanca is very attractive, not only for the national tourism, but also for the international one, because of its snowy peaks, that are a total of 35. The highest of all is the one of Huascarán that is to 6746 meters on the level of the sea.

In most of its mountains you can practice different sports, such as skiing or snowboarding and, as in other peaks, trekking and mountaineering.

Most of the activities are done near Ancash, which departing from Lima, is approximately eight hours of travel.

Huascarán, the Highest Peak in All of Peru

Huascarán, one of the highest peaks in America and the highest in Peru, is located within the National Park that bears the same name and covers the entire Cordillera Blanca.

This park has been a world heritage site since 1985 due to the beauty of its mountains, lakes and the great variety of flora and fauna unique to the region.

Being 6768 meters above sea level, it is important to prepare for a very intense activity. During this expedition you will have to adapt to the altitude and its effects.

In spite of being the sixth highest peak in America, it has the record of being the highest mountain in the tropical area of the entire planet, in addition to being the second furthest point from the earth’s axis, thus having less gravity attraction.

It is important to note that to visit this mountain is mandatory to hire a tour operator.

Peru offers a great diversity of options for lovers of sports and adventure, mainly because of its enormous and special mountains.

It is important to note that there are different mountain ranges and one of the most impressive is the Cordillera Blanca. This one is inside the National Park Huascarán, considered Patrimony of the Humanity.